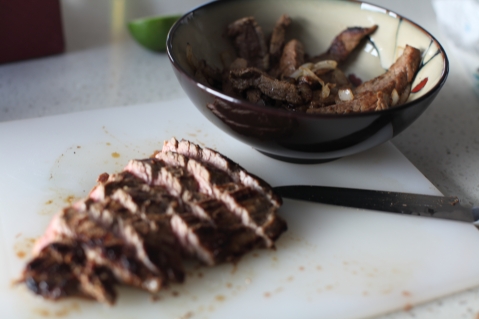 The very first time I had ever visited Scott in Houston, he had taken me directly from the plane to his favorite Tex-Mex restaurant. His obsession with this place meant that we ate there at least twice a week….minimum. Every time we go Scott orders the same thing; tacos al carbon or we would order the steak fajitas for two. Seeing that we don’t have the luxury of frequenting that restaurant during the season I tried to imitate the same fajitas while we are on the road so we won’t miss out on our weekly dose of fajitas for two. This recipe can be swapped out from steak to chicken or even shrimp, marinating times will vary. 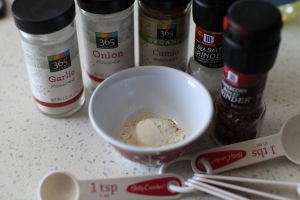 In a small bowl mix all ingredients together into a paste or sauce. In a large storage bag, pour marinade over both sides of the flank steak and marinate for an hour. If you are using shrimp, you will only need to marinate it for 5-10  minutes, you don’t want the lemon juice to cook the shrimp. If you opted for chicken, you can marinate for at least 30 minutes. I like to marinate my flank steak at room temperature so the meat can be brought up to temperature while it marinades. The longest you can leave raw meat out of the refrigerator to marinate is two hours, no longer than that! With this recipe you really don’t want to marinate it longer than an hour due to the acid in the lemon will start to “cook” the protein.

Remove steak from bag and preheat grill or cast iron skillet on high heat. If you are using a cast iron skillet, heat a couple tablespoons of vegetable oil in the pan before searing the meat. *I cut the flank steak in half in order for it to fit in my cast iron skillet and cooked in batches. Sear both sides about 3-4 minutes each for medium rare to medium. Remove from skillet or grill and let rest before slicing against the grain. While meat is resting sauté onions and bell peppers. Serve with warm flour tortillas and your choice of toppings. Here’s my recipe for pico de gallo.