This recipe is 100% inspired by a dish a fellow Oakland A’s WAG, Jessica, had suggested. Jessica is from the Nashville area and had this dish at a local restaurant during the off season. After talking about all the new trendy restaurants opening in her area, she had mentioned that she had this cauliflower salad and that I NEED to replicate it! Challenge accepted. I can only imagine what this originally tasted like, but the description had me at “roasted” and I was immediately up for the challenge. As you may know from previous posts, I am a sucker for roasted vegetables so hearing about this dish excited my taste buds! Thankfully, Jessica had  sent me a screenshot of the menu to give me a better idea of what was actually in it and I figured why the heck not try and replicate it! The exact description is “Roasted cauliflower salad, toasted almonds, radish, scallion, sherry/sorghum vin.” The description is pretty cut and dry so I wasn’t feeling too much pressure to live up to the original.

You probably read the title and thought to yourself “what the heck is SORGHUM?!?” I had heard about it before on some sort of food show, but I will admit I was not familiar with ever using it. Once I saw what it was, it’s pretty much molasses or a really thick syrup. In the Southern states, sorghum syrup is used on biscuits, pancakes, or hot cereal so basically as a breakfast condiment. Don’t knock it until you try it ya’ll! That was my best southern impression and I have been guilty of using that phrase once or twice, ya’ll. Sorghum compared to honey, is packed with calcium and is lower in both calorie intake and sugar. They can both be found free of GMOs and are natural sweeteners. As for flavor, sorghum has more of a very slight herbal flavor to it compared to honey but it is so minimal you wouldn’t mind it.

a large head of cauliflower, chopped with stalk and leaves removed

salt and pepper to taste 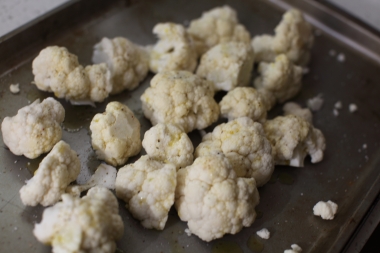 Preheat oven to 425 degrees. Place the chopped cauliflower on a rimmed baking sheet and drizzle with about 1-2 tablespoons of olive oil and season with salt and pepper. Roast in oven for 20-30 minutes until deep golden brown. Toss cauliflower halfway through roasting.

While the cauliflower is roasting, start prepping the sorghum sherry vinaigrette. In a bowl whisk together sorghum and sherry vinegar. Continue whisking and slowly drizzle in olive oil until everything is incorporated and dressing is smooth. Season with salt and pepper to taste.

Toast your sliced almonds in a dry non stick pan on medium high heat. The almonds will toast quick, so keep an eye out on them. This usually takes about couple minutes. Remove from pan and set aside.

Once the cauliflower is removed from the oven, place cauliflower, sliced radishes, and toasted sliced almonds in a large bowl. Toss everything with a couple tablespoons of dressing and garnish with sliced scallions. Serve warm.

If you like your dressing sweeter, feel free to whisk in more sorghum.