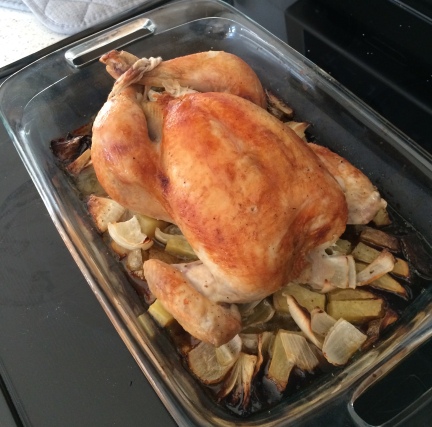 When I first started cooking, I thought roasting a whole chicken was intimidating. When I finally got around to making it I felt like an idiot for not making it sooner! It is super easy and not at all intimidating! Now its become addicting! I think what definitely helped me figure this out without having “set it and forget it” in my showtime rotisserie cooker, was a meat thermometer. It helped me from not poisoning Scott and I and making sure the chicken was cooked through at 165 degrees F. Traveling on the road forces you to bring things back to basics and not rely on the tools or kitchen appliances you have at home. I can only travel with so many appliances from state to state until it gets old packing and repacking all these heavy boxes, not to mention some rental homes don’t have a whole lot of storage space. This roasted chicken is super versatile too! I use this roasted chicken for everything! It’s one of my favorite meals to make when Scott is on the road and I’m home alone, because I can use the leftover chicken a few other ways during the week. I’ll use it for sandwiches, chicken pot pies, or on top of a salad for lunch. Today we’ll focus on the basic roasting and later this week we’ll talk pot pie!

A great rule of thumb to go by when roasting a whole chicken is usually 15 minutes per pound. So say you pick up a 4 pound whole chicken you are going to cook it for about an hour. You want to make sure the chicken reaches an internal temperature of 165 degrees Fahrenheit and the juices are running clear.

The best part of this dish is that it’s an all in one dish. The potatoes roast in the juices from the chicken and roasting them together makes clean up even easier!

Here’s a link to the thermometer I used it’s really affordable and it works great! It also gives you the proper meat temperatures on the case so you don’t have to memorize them all!

Preheat the oven 425 degrees F. Dice one onion into a one inch dice and toss the onion and chopped potatoes into the bottom of a roasting pan. I had to use a 9X13 pyrex dish to roast my chicken today because we are currently on the road in San Francisco and I have yet to go to Bed Bath & Beyond to buy one to bring with me while traveling. I like to make do with what I have and what I have is a pyrex dish.

(UPDATED PICTURES BELOW: I finally went out and purchased a roasting pan so here are some updated pictures and close ups of the chicken while I prepped it)

Drizzle about 1-2 tablespoon of olive oil over the potato mixture and season with salt and pepper. Now prep the whole chicken by quartering the second onion, slice the lemon in half, and cut the whole head of garlic in half as well. Before you stuff the cavity of the chicken be to remove the giblets or bag from inside. You are then going to season the inside of chicken with salt and pepper. Once that is done stuff the chicken with the quartered onion, one half of the lemon, and the head of garlic.

Now tie the legs of the chicken together with kitchen string or twine so the drumsticks will cook evenly and it also helps keep everything inside the bird. My birds are into bondage to cook evenly. You can also cut a small slit in the skin on the breast closest to the cavity opening and tuck the ends of the drumsticks in it if you don’t have kitchen twine (Seen in updated picture above). Don’t forget to tuck the wings under the chicken as well so the tips won’t burn. Season the whole chicken all over with salt and pepper. Place the chicken breast side up on top of the potatoes in the roasting pan. Slice the butter into pieces small enough so that they will fit under the skin of the chicken. You’re going to slide the butter under the skin of the chicken so while it cooks it will baste the chicken and make it juicy and golden. Squeeze the other half of the lemon over the chicken and the potatoes. 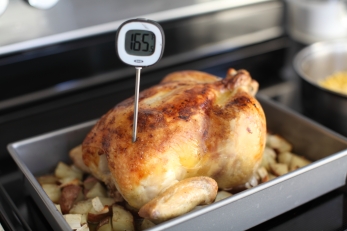 Place the chicken in the oven to cook for 15 minutes per pound until internal temperature is 165 degrees F. You are going to want to temp it out in the chicken breast but be sure not to push it too far down avoiding hitting the bone. If you notice that your oven doesn’t cook evenly, feel free to rotate the pan while cooking. Also if the chicken isn’t getting 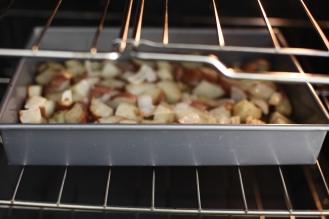 Here’s the perfect way to reheat these leftover later this week in a previous post:

Keep an eye out later this week to see how I use the leftovers for chicken pot pie!

If you want a spicier roasted chicken I recommend seasoning with the following mix rather than just salt and pepper, also this way I recommend squeezing the lemon just on the potatoes and not the chicken.